How many clicks does it take to change electricity supplier?

How easy is the process of changing electricity supplier? As in every #ClickChallenge, we asked our Crowd of real users and testers to help work this out.

After all, there are few reasons why you might decide to change supplier: customer service is unresponsive or, even worse, the bill is too high.

The churn rate in the utility sector is not to be taken lightly. The annual average of users changing energy and water supplier is between 12 and 15%, and the trend is not declining1.

But we can't live our lives without electricity, gas and water, and those 12–15% of users will have to switch to a new supplier. But how many clicks does it take to make the change? How easy is the process? And given the current situation: is it possible to complete the whole procedure online? As in every #ClickChallenge, we asked our Crowd of real users and testers to help work this out.

In the week between 19 and 26 May, together with our community of testers, we requested a change of electricity supplier on the websites of 18 companies, counting the number of clicks necessary to achieve the goal.

In particular, of the 18 analysed, six are digital native (Illumia, NeN, Pulsee, Tate, WeKiwi, WithU), while the others are traditional.

As always, before we reveal the results, some clarifications are necessary:

Not only clicks: other metrics to evaluate user experience

Before showing the results, let's make another clarification. As we repeat in all #ClickChallenges, the number of clicks is by no means a complete metric to measure the usability (much less the User Experience) of a site. For this reason, the click count was combined with questionnaires intended to evaluate:

To do this, we asked our testers these questions:

This is because, as we have also explained in the previous #ClickChallenges, a higher number of clicks does not necessarily mean a lower quality of user experience. For example, in the Spanish bank challenge, the bank with the highest number of clicks was also the one with the lowest perceived level of difficulty.

Having said that, we can finally unveil the results.

First of all: all of the websites in the research would allow users to change the supplier online.

Already at a glance, in the graph below, we can see how the number of clicks and user satisfaction, for example, are not necessarily linked. In fact, the supplier with the most clicks and the one with the fewest clicks got the same satisfaction score. 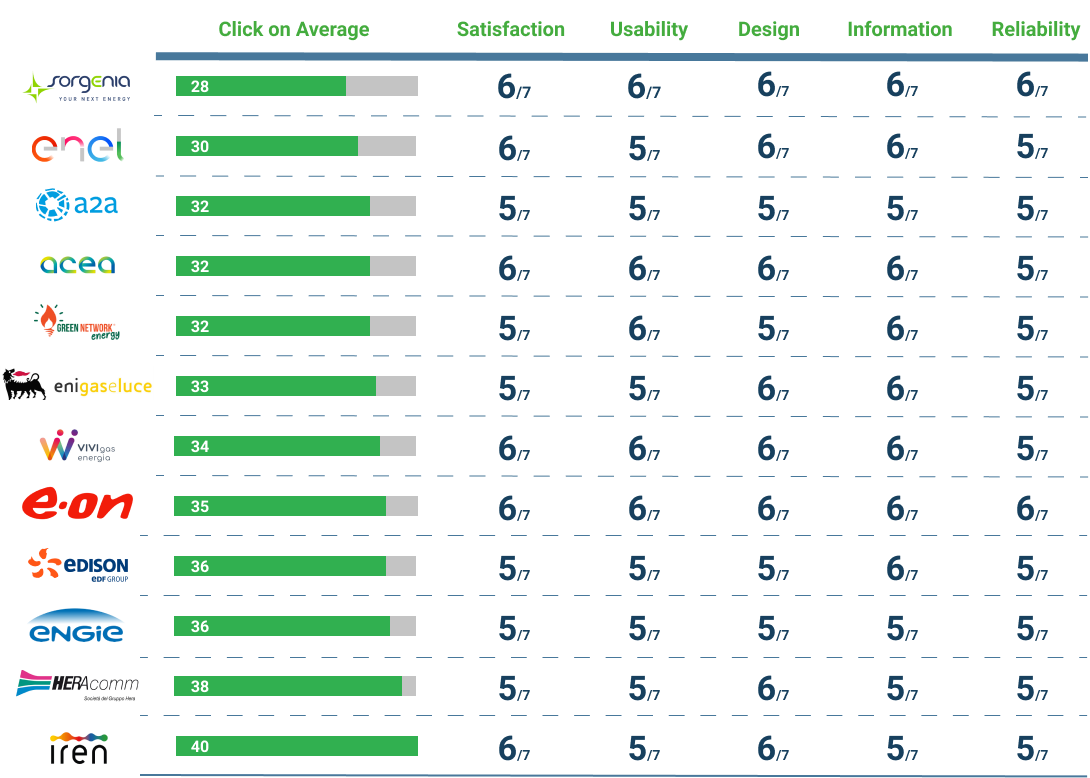 Regardless of clicks, ratings are consistent across all brands for all metrics. No company received the highest possible score, but all 12 traditional companies scored high (minimum 5 out of 7 points). By the way, let's make a brief note: the scale in sevenths is used because it is typical of user experience research.

The average number of clicks our testers counted was 33.8. As for the other five metrics, design scored the highest on average (5.7 out of 7). The metric that suffered the most was reliability, which averaged 5.2.

A separate discussion must be held for fully digital companies. Those who expected higher scores than the traditional ones were wrong. Let's take a look at the results:

On average, digital companies overtake traditional ones only in terms of usability and fewer clicks.

In fact, the number of clicks did not make as big a difference as one might think: 33.8 on average for traditional and 29.8 for fully digital. Reliability represents the widest gap between traditional and digital native. Traditional companies, in fact, are perceived as more trustworthy than digital-native ones: 5.2 vs 4.5. All the other metrics, on the other hand, do not show significant differences between fully digital and traditional.

Of the 18 companies, seven allow you to upload a bill to simplify data entry (similar to the procedure whereby, for example, in eCommerce, you can register through social networks). Of these seven, four are fully digital (Illumia, NeN, Pulsee, WeKiwi) and three traditional (Sorgenia, Enel, Edison). Here again, we see that there is no clear-cut difference between the two categories.

We say it again with every Click Challenge: the number of clicks to reach the goal is not comparable to the depth of a usability test or a UX test. This can also be seen in the metrics we have selected, which show that experience building is far more complex than a click-through process.

This research aims to raise awareness among Italian (and other) companies about the usability, UX, speed and user-friendliness of their digital properties.

In order to improve the churn rate we were talking about at the beginning of the research, it is necessary to analyse the entire Customer Journey and not just a section of it (as we have done in this case). As always, AppQuality is available to all those companies that want to build fluid and customer-centric products. To do so, it includes real users of the service in the design, development and validation processes: crowd testing.

Looking for a doctor? You can choose one on the web. UNGUESS gets users to test the websites of private clinics

Testing Connected Cars: why is important and what aspects to focus on

The Internet of Things (IoT) has marked a significant place in our life. Starting from connected smart gadgets to home appliances, the latest...

Looking for a doctor? You can choose one on the web