2019 was an important year for the transition of the entire banking system from physical to virtual; traditional banks as we once knew them are becoming online banks with an increasingly sparse network of regional branches (source: KPMG, 2019). This process was accelerated by the pandemic that took hold in early 2020.

In Mastercard's European Digital Banking Study 2019, which covered 11 markets, the results revealed that Italy is one of the countries where consumers use digital banking solutions most frequently. In particular:

Another significant statistic is that almost two thirds of Italians (62%) believe that financial solutions need to evolve over the coming years, since they simplify the payment experience and make it more convenient.

It appears, therefore, that Italians trust these new technologies and have a positive attitude towards using them for the all-round management of their financial routine. In this light, the banking sector will need to evolve to address the challenges of the new digital age, implementing and improving solutions already in use such as multi-factor authentication, secure applications, and other forms of security such as biometrics.

Armed with this data and these observations, we asked ourselves a simple question:

How easy is it to open an online bank account in Italy?

We started with a data point that was easy to analyse and could give us an initial numerical indicator regarding the process of opening an account: how many clicks does it take to open a current account in Italy?

Our community of testers gave us the answer.

The study: how many clicks to open an account?

In the week between 15 and 19 June 2020, we asked some of the testers from our community to open an online account with a number of Italy's major banks and to count the number of clicks needed to achieve this.

Before we reveal the results, we should point out some of the details of the study:

Here are the results: 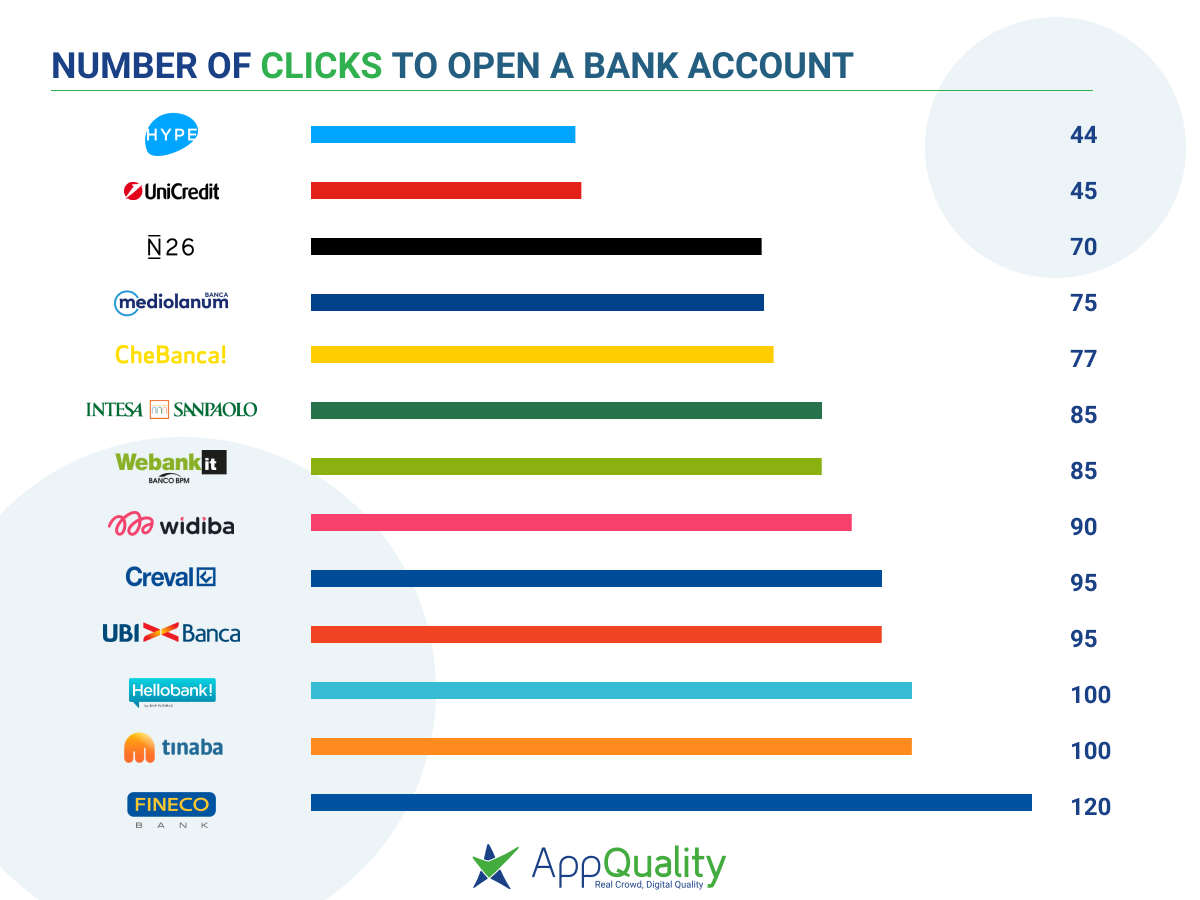 As might have been expected, a bank conceived and designed to be fully digital takes first place: Hype. However, more traditional banks such as Mediolanum and Intesa Sanpaolo have also managed to respond to the needs of the market and simplify their digital services, earning spots in mid-table alongside more modern banks.

We should also underline that the number of clicks often increases with more stringent security processes; however, in many cases these processes are an indicator of reliability for users:

However, we didn't stop there. To analyse the extent to which the various companies have gone digital, we asked our testers to check which banks allow users to open an account via the app.

Given that all the banks in question have an app, here is a list of those that offer the option to open an account and those that do not.

Unsurprisingly, of the banks that offer their customers this option, 4 out of 5 are fully digital. Of course, the new digital banks have had the advantage of starting with a blank canvas compared to their traditional counterparts. Nevertheless, a service of this kind significantly improves the user experience, and some banks (like UBI Banca) have already realised this.

This study was not designed to choose a winner, so we won't. Each bank has different processes and services which – in most cases – reflect the needs of their consumers.

However, our advice would be not to take your eye off the ball when it comes to the evolution of digitisation and the needs of consumers, who can open an account today with just a few clicks of their mouse or a few taps on their phone.
As we mentioned at the beginning of this article, Covid-19 has sparked a trend in favour of digitisation. Now more than ever, it is crucial to listen to the needs of users in order to strike the right balance between safety and innovation.

The state of retail digitisation in Italy vs Spain

93 seconds and 12 clicks to book a flight: the Flight Aggregator Challenge

Is your eCommerce ready for Black Friday?

Those in ecommerce and retail are already in the midst of preparations for November. Is your ecommerce ready for Black Friday and Cyber Monday?

UNGUESS completes a funding round of over 10 million euros

The round, led by Fondo Italiano d'Investimento, will help enhance our leadership in the crowdtesting market in Italy and enter strategic european...