93 seconds and 12 clicks to book a flight: the Flight Aggregator Challenge

What factors contribute to the success of a flight comparison site? Which are perceived to be the best sites? This is revealed in a new study by UNGUESS, a crowdsourcing platform that, through the involvement of an engaged community of real users and customers, enables companies to make better decisions faster, based on objective data.

The aim? To assess the perceived quality – among Italian users – of the eight sites.

Milan, July 2022 – A large number of Italians are booking their holidays and purchasing flights online: according to ISTAT data, 66.5% of bookings were made online in 2021 (58.4% in 2019)[1]. Booking.com, eDreams, Expedia, Kayak, lastminute.com, Skyscanner, Tripadvisor and Volagratis are among the best-known flight comparison and booking sites in Italy (and beyond), which is why UNGUESS asked its community to try them out[2], with the aim of identifying the most popular site among users and, most importantly, the features that make it the best. The results of the analysis reveal, for example, that it takes less than two minutes and 12 clicks to book a flight online.

Users and parameters taken into account in the test phase

For this study, UNGUESS involved Italians who have already booked a flight online, albeit with varying frequency (from less than once a year to at least once a month). These are users who generally book flights themselves, without contacting travel agencies, and do so via both mobile and desktop. Finding this sample of users was easy: UNGUESS selected the ideal people for this role from within its worldwide community.

The elements the community was asked to test included the following, rated on a scale of 1 to 7: how easy it is to book a flight online on a particular site (expectation versus reality), how many clicks it takes, how user-friendly the site’s features and graphics are, and whether they would recommend the service to a friend.

Expectations: a task that is easy to complete and tends to be quick

The task completion time on the eight flight comparison sites was quite varied, with a minimum of 70.6 seconds and a maximum of 144.27 seconds (almost two and a half minutes). Yet the time users expected to take before starting the task was higher, with 60% of participants believing it would take between two and five minutes (against a real average of one and a half minutes). 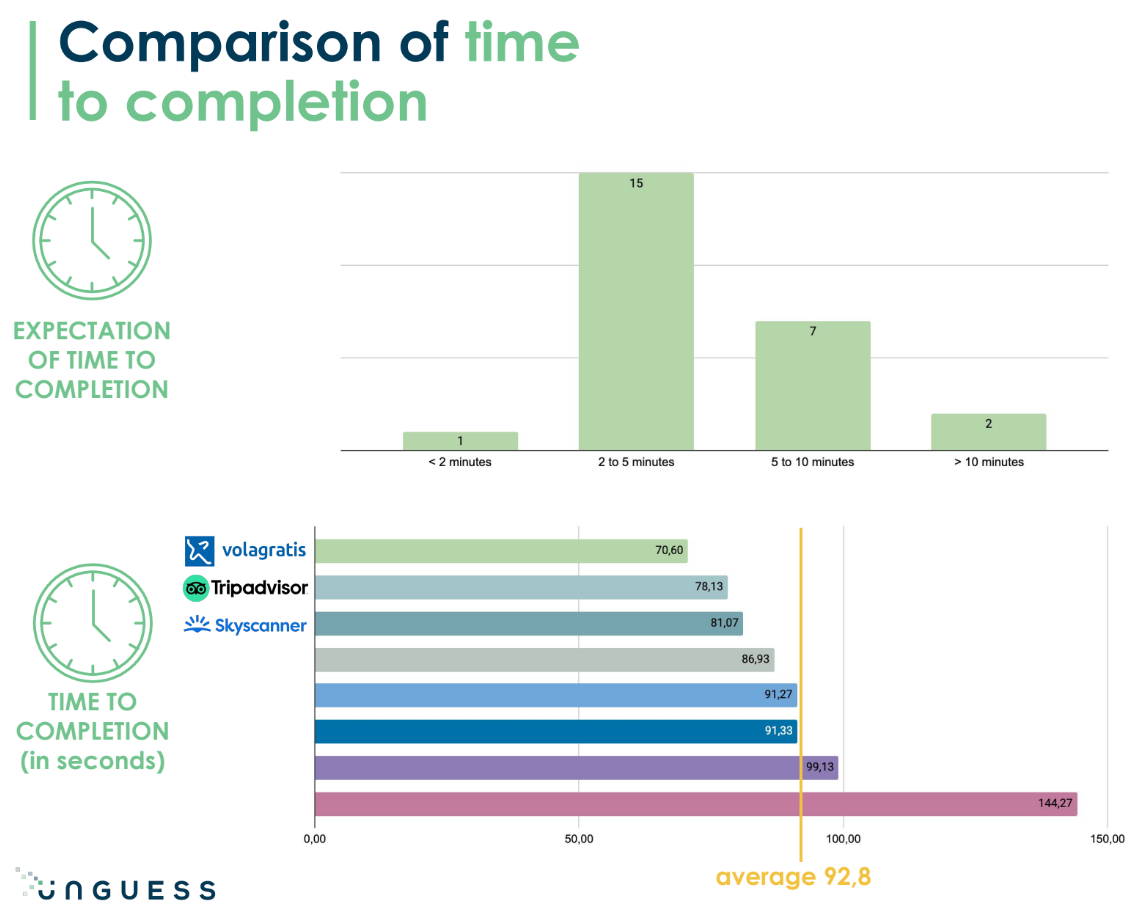 “While the task completion time varied from one website to another, it turned out to be much shorter than expected before the test,” comments Laura Morabito, UX Designer & Researcher at UNGUESS. “This may show that, since the user has much longer expectations of the task flow duration, the quality of the interaction determines the ‘perceived’ speed.”

Expectations regarding ease of completion were rated at 5.88 out of 7 overall, demonstrating that users are now accustomed to buying flights online, and even those who have never done so still consider it an easy task. Once the task had been completed, the actual ease of booking a flight was rated at 6.13. Specifically, eDreams, Booking.com and Tripadvisor are rated the “most user-friendly” comparison sites.

“The perceived ease of use during the test is also better than expected, although we had anticipated even better results given the significant gap between the expected duration and actual time spent,” comments Laura Morabito.

In terms of the number of clicks taken to complete the task, the average was 11.9 clicks[3], and again, the Volagratis site ranked first with just 10.5 clicks, followed by lastminute.com with 11.2 clicks and eDreams with 11.3 clicks.

“Although clearly the number of clicks gives a sense of the platform’s user-friendliness, users then choose a comparison site from the available alternatives mainly on the basis of other parameters, such as how prices, timetables and baggage information are presented, as well as loyalty programmes and non-seat ancillaries. The number of clicks with all the necessary steps to buy a flight online is only in third place,” explains the UX Designer & Researcher. 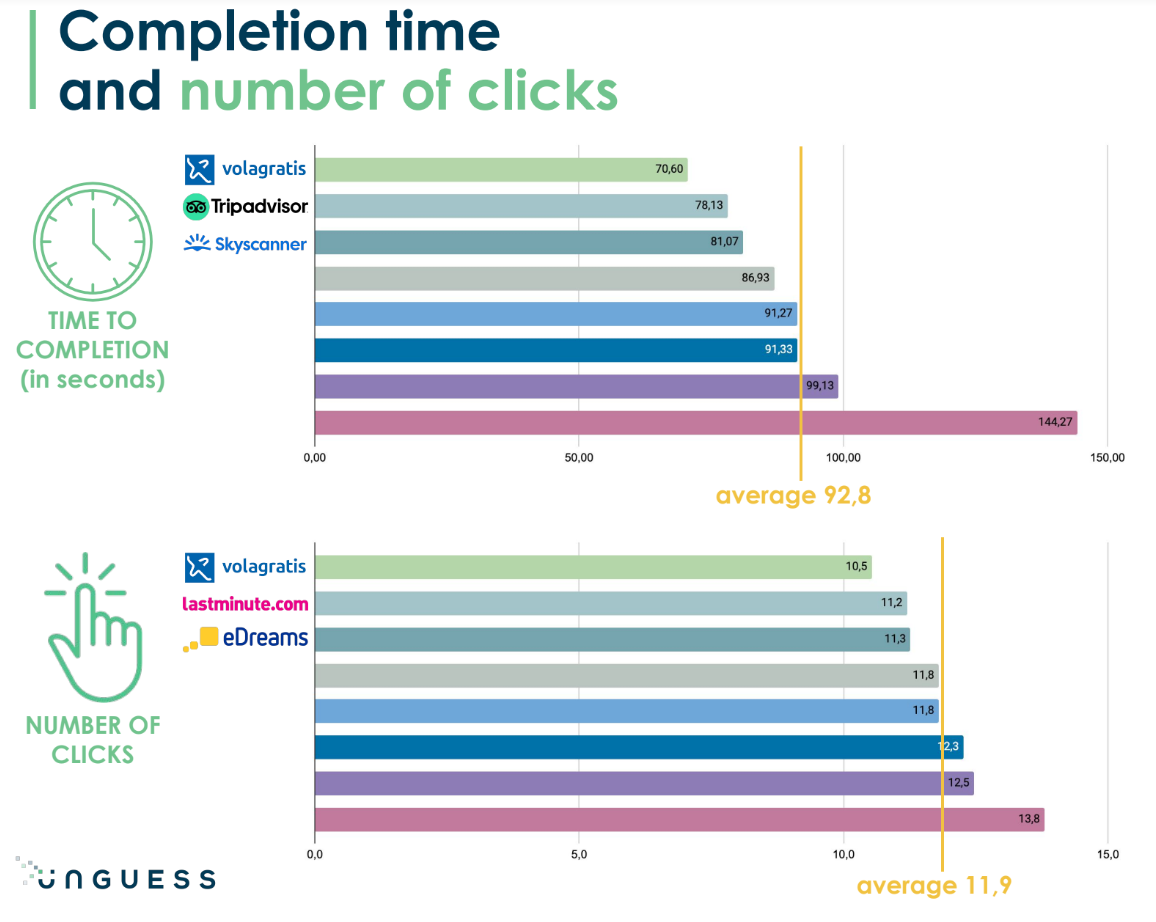 The satisfaction, information quality, attractiveness and net promoter score (i.e. “likelihood to recommend” to a friend) metrics received positive ratings, with an average of 5.65, 5.86, 5.8 and 5.58 out of 7, respectively. The top three remains unchanged in terms of the satisfaction, information quality and net promoter score parameters, with eDreams, Booking.com and Tripadvisor as the top players.

One variation can be seen in terms of attractiveness, where together with Booking.com and eDreams we find Skyscanner (so eliminating Tripadvisor).

“From these data, it can be seen that the metrics are highly consistent: a product that is perceived as more satisfying also has better information quality for users, is attractive and would be recommended to friends,” explains Alessandro Caliandro, Product & Design Lead at UNGUESS.

As we have seen, user ratings were generally positive, but what determines the success of a flight comparison site?

For more information on the study, the methodology and for more on the results, we have explained it all in a webinar. Download the material here for free.

[1] https://www.istat.it/it/files//2022/04/Viaggi_vacanze_2021.pdf
[2] Twenty-five people with an average age of 35 (15 men and 10 women) participated in this new UNGUESS test, 19 of whom
performed the test via desktop and the remaining 6 via mobile.
[3] The number of clicks is expressed as an average of the results of the various test participants. This is why, in some cases, clicks
have decimal places.

Looking for a doctor? You can choose one on the web. UNGUESS gets users to test the websites of private clinics

Looking for a doctor? You can choose one on the web

Why Customer Journey Mapping is not enough: introducing CJ Benchmarking

Markets are undergoing rapid transformations placing companies in a state of hyper-competitivity. A client-centric approach is no longer sufficient:...